The Boy with the Thorn in his side surname, Aidan's written some short story zingers that have been up at Shotgun Honey and Pulp Metal Magazine amongst other places.
I thought I'd Ask him what's going on at the moment, and though These things take time to put together, he didn't Panic.
I would say he's a bit of a Rogue but that joke isn't funny anymore... 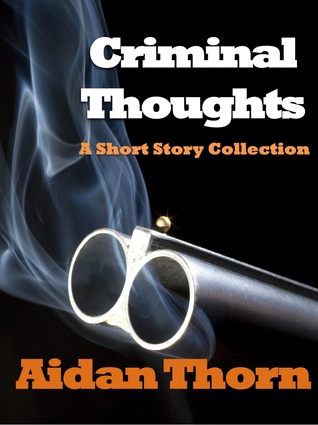 
I've got a couple of things on the go at the moment. Firstly, I'm working with Craig Douglas and Darren Sant on getting my second short story collection, Urban Decay, ready for publication under their Grit Fiction publishing company. I think we're nearly there and I'm really excited to get this book out with them. I'm also working on a novella that I've been working on in many ways for about 17 years. I had this idea for a screenplay years ago and I started writing it, but it sat in a desktop folder somewhere for years and never progressed. I was clearing out some old files a couple of years ago and found it again and still liked the idea so I decided to turn it into a novella. I've been plodding through it since about this time last year, but it's nearly there and I'm really happy with it. It's a sort of crime farce about an accidental kidnapping and it's called Worst Laid Plans. Once it's done I'll try and find a publisher for it.


Why did you start writing?


In someways I've always written. I used to write songs, I got into film and started having script ideas and I've always loved books and figured I'd give it a go. I probably started taking it seriously about 5 years ago when I started my first novel, but I've always found that I get most satisfaction from the short stuff, there's a real buzz from writing a story, seeing it published and getting a reaction to it, that's what keeps me coming back to the short stuff and has stopped me progressing the novella or turning the novel into something I'd be happy to see published... I need a bit more discipline, because when I started writing short fiction I was hooked.


Where do you write?


Everywhere. In my living room sat on the floor (that's where I am now), in the garden with the sun shining (that's where I'll be later), in the office at lunchtime, on the train or in hotel rooms when I have to travel for work. Where ever and whenever I can basically.


Is your writing inspired by real events?


Yes and no. Some of my stories are inspired by real events, for example the very short story in new collection, Urban Decay, called 'Lucky' is basically me making a story of an encounter my friend had last year and I thought it would make a neat little short. I don't write too much horror but I did write one a couple years back that was inspired by a photo of my parents wedding... There's a ghostly figure stood over a grave stone as they walk away from the church and I used that to inspire a story called 'The Guest' that was published at Thills, Kills 'n' Chills. Obviously, there's often elements of what you know when you write something, but most of what I write is entirely fiction, set around familiar areas for me. If much of what I wrote was inspired by real events I think I'd be in prison, insane or both.


No. That's why I try to make sure I pinch moments whenever I can, as I said, on the train or during lunch breaks etc...


Have you got a favourite author/genre?


Absolutely, I'm a fan of crime fiction, as most of my writing will show you. For me the masters of this genre are Lawrence Block, Dennis Lehane, Michael Connelly and the number one is George Pelecanos. But the great thing about writing myself is that I've found a bunch of other writers that I never would have who I'm hugely impressed by, I'm going to upset a few by missing them out, but I have to mention Darren Sant's Longcroft books and his excellent adult fairytale The Bank Manager and the Bum, I was on a train to and from Liverpool last month and I read two excellent novella's White Knight by Bracken MacLeod and Bang Bang You're Dead by Nick Quantrill. I'm really impressed by the work coming out from Number 13 Press at the moment, particularly Grant Nichol's The Mistake. Paul D Brazill always impresses me. Chris Leek wrote two of the best books I read last year, his short story collection and his Western novella. And, I have to give a mention to Gareth Spark, his short story collection, Snake Farm, is out soon and I've been privileged enough to have seen and advanced copy... Wow, this guy is unbelievably talented and should be one of literature's biggest stars.


Both, although I'm tending to sway more towards e-books these days. I still get physical books for the authors I love the most, but an e-book is just so much easier to carry around and I always have a huge choice of books right there with me when I finish one.


Well I've already mentioned quite a few people in the question above. I've met so many talented people through writing, all of whom deserve a mention here. I know I've already given him a shout out, but I urge people that if they by one book this year, well make it Urban Decay by me, but if you buy two, it has to be Gareth Spark's Snake Farm. Honestly, there is so much talent in that guy it's scary. Actually, I'm going to suggest people buy a third book this year, grab Rogue from Near to the Knuckle too. It's packed with talent, some of my favourite writers working today, I don't want to offend any of them because they're all great but people that have particularly impressed me from this collection in the past year are T Maxim Simmler, Matt Mattila, Cal Marcius, Gary Duncan and Tess Makovesky. I also think people should be keeping an eye on what Number 13 Press is doing, they're putting out top quality crime fiction every month for 13 months (please let it go on longer!) at just 99p... I started the latest one from B R Stateham this morning and it's great.


Aidan, when you were 14 and away in Wales on a family holiday and you saw a sign that said, Nirvana Live tonight, returns available, why the fuck did you say, 'I'm not going with you' when your dad said, 'if you want to go I'll go take you'... Kurt was dead within a year and my chance to see Nirvana was gone... Everyday I wish I could go back and give my younger self a slap.


Where can we find you?

And, if you're ever in Southampton you can drop me a line and find me for a beer
Posted by Charlie Wade at 03:22

Charlie Wade is fortyish and lives on the edge of the Peak District in Derbyshire. He's written three books, Seven Daze, The Bailout, and The Spy with Eczema.


Some short stories can be found online at the following: