Another freebie few days for The Bailout ebook on the Amazon. It's coming up to five years since I published it, where has that time gone ? I'm doing a paperback version in the next month or two, formatting is a bit trickier than ebook, but nearly there.

Or if you're in the US 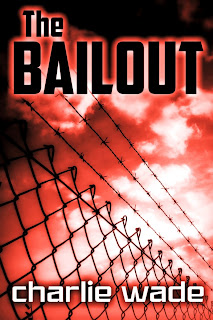 Posted by Charlie Wade at 01:14 No comments:

Been a while since I posted something, especially something un-allotment related. Truth is, not much has been going on. Apart from breaking the big toe, learning 3d CAD, trying to walk the dog with a crutch, coping with an overgrown allotment, making strawberry jam and failing to learn how to use Oxford commas correctly, there's little I could have blogged about.

Bookwise, I'm fiddling with a police procedural which will be called The Last Gang in Town [yet another The Clash song title used] and toying with the Flustopia series, probably about halfway through the first part of it. I've got plenty of ideas for future books, but I guess until these two are out of the way, nothing else would or should get written.

And it's summer too, and hot (at least at the moment), so there's another reason for not blogging much. Normal service, as they say, will be resumed at some point soon. 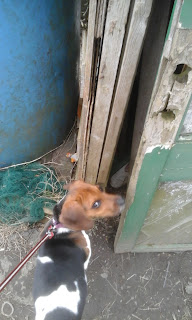 Here's a picture of the dog looking nervous at the thought of  going in shed number 3.

Posted by Charlie Wade at 11:59 No comments:

After a short break, Ten Questions returns with North East Brit Gritter, Julie Morrigan. Echo and the Bunnymen were wrong about a few things in their time, and 'Spare us the cutter' was way off the mark when the cutter in question is Julie's Cutter Trilogy. So bring on the dancing horses, sail the seven seas, and see what makes Julie click. 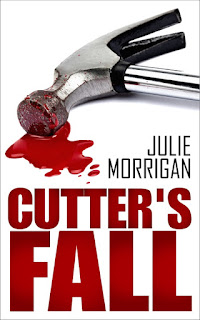 I’ve just published Cutter’sFall – the final novella in my north-east gangster trilogy – as well as the combined Cutter Trilogy. The ebooks are selling really well at the moment, and I’m currently pulling together a paperback edition which will be out soon.

Next up should be a brutal serial-killer thriller novel – provisionally called The Last Weekend – that lies somewhere between Agatha Christie’s And Then There Were None and a slasher horror flick. It’s been a work in progress for quite some time now, but the latest draft should be off to my editor very soon.

Why did you start writing?

It’s something I’ve always done since I was little – I started writing my first novel when I was around seven. I remember feeling a sense of surprise when I discovered there were people who didn’t write – for me it’s as natural as breathing. I suppose it’s about looking at the world from different viewpoints and trying to make sense of things. That and trying to provoke a reaction, to make the reader feel something as a result of reading a story, whether that means they love or hate a particular character. That emotional connection is vital.

Where do you write?

I don’t really have a special writing space; I probably write most often on my laptop just sitting on the settee in the front room. I’m lucky in that I live on the coast and have a great view from that seat – even though at the moment the sea and the sky are a uniform grey and it’s raining, I can still see the lighthouse, and the waves crashing over the pier. When it’s dark, I get to see the lights on the boats sailing into the harbour and on good days, when the view is mostly blue and white, the yacht club often comes out to play.

Is your writing inspired by real events?

Yes, sometimes. On occasion the real world can be so much more fucked up than anything the most twisted crime writer can dream up. For example, one story I wrote was inspired by a supposedly true anecdote I was told about someone being strangled with barbed wire. Gordon Cutter – the vicious crime boss in my novella series – was at least partly influenced by real-life counterparts who should probably remain nameless. Like most writers, I think, I’ll read or hear something in the news, and then the ‘what if?’ factor creeps in and kicks off the imagination.

It never seems like it. It’s at least partly because in my ‘everyday’ profession I’m a ghostwriter, editor and proofreader; so having spent the day working on other people’s words it’s sometimes an effort to make progress on my own! But it’s worth the effort, whether that’s adding a thousand words to a work in progress, or just scribbling down a perfect five-word character description that’s just popped into your head.

Have you got a favourite author/genre?

Either – it’s the story that matters, not the format. Ebooks arguably allow more flexibility in book length, which can be positive for both writers and readers. A traditional publisher of physical books wouldn’t generally touch a short novella, for example, but some of my most successful ebooks have been shorter than novel length.

If you enjoy police procedurals, I can recommend Chris Simms’ DI John Spicer series. They’re meticulously researched, very well plotted, and Spicer is a great character. I was late to the party with these, but that meant there were a bunch of books to go at once I’d found them. I’m currently reading Sleeping Dogs, which is the seventh in the series.

What were you thinking?

Where can we find you?

Just like a Ford Cortina, sometimes mk II surpasses the original. Not true of all sequels of course, Jaws, Star Wars etc, nowhere near the original.

Last year, I polythened the old greenhouse thing on the allotment and it survived the summer but not the winter. 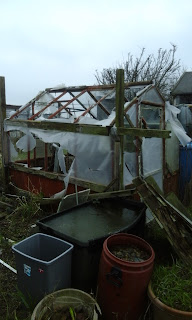 Early this year, work began on rebuilding. Firstly I gave it a coat of bargain shop wood preserve then fixed the door and one front side panel. 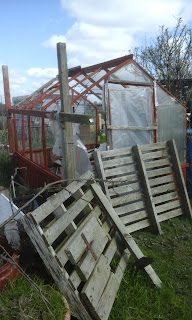 Then, someone kindly gave me a load of polycarbonate sheets.  I was originally going to use thicker plastic sheet, but the polycarbonate panels are much stronger and easier to fit. 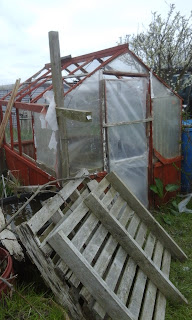 A few weeks later and a bit of bracing and it's getting there. 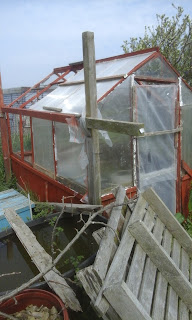 Finally, about ten days ago, the job was finished. It maybe needs a bit more bracing and sealing, but it's workable for the summer. 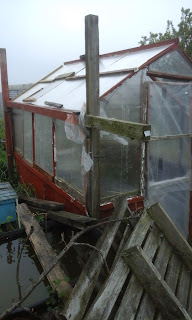 From the other side. Note the glass has somehow stayed intact for over five years. The end panels were all I had to replace on this side. 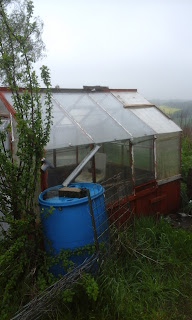 Finally, four days after fixing it, I fell over a gate while chasing the dog after she escaped, and I broke my big toe. 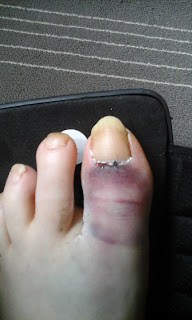 A week after doggate, I'm still not able to walk unsupported and so far have been nowhere near the allotment. Part of the bone that's fractured (turn away if you're queasy) has rotated 90 degrees so the Doc said it will be at least six to eight weeks before it's healed, maybe longer if it doesn't set right. I'm hoping in a few weeks I'll be able to go up the allotment and do light duties. Until then, the new greenhouse remains empty.
Posted by Charlie Wade at 05:41 No comments:

Back again in the allotment

Spring is finally here, bringing with it the promise of produce and a bad back from the allotment. Having got slightly ahead this year (or at least more ahead than in previous years) it's not the big rush it has sometimes been. So what's up the plot at the moment ?

So that's it for now. Nothing earth shattering, just getting things ready really. I did plant some broad bean seeds but they haven't come up yet so there was no point taking a picture. And sorry, but there's no shed or greenhouse picture this time. The greenhouse will be rebuilt, possibly over the may bank holiday, but maybe before if I get my act together.

Posted by Charlie Wade at 12:29 No comments:

Email ThisBlogThis!Share to TwitterShare to FacebookShare to Pinterest
Labels: Allotment

Double glazing salesman, Alan, and his buddy, Beale, limp from one disaster to the next as alcoholism, a dead dog, and gambling debts drag Beale down and Alan with him.

This is a fantastic gritty urban novel. Set in Manchester, it's the side of life rarely seen. Alan is a great character, and you have to feel for him at the end despite all of his bad choices. All is believable and told in Ray Banks' unique and enjoyable style.

www.amazon.co.uk/Dead-Money-Ray-Banks-ebook/dp/B00GWGYDZO/
Posted by Charlie Wade at 05:37 No comments:

So I've written about another 20,000 words since the last writing update [insert: 'some of them in the right order' joke here] I was going to list (out of the five books on the go) what is now at what length, but I'm probably better off by giving a time scale when each will be finished...

Last Gang in Town - few more months as rewrites not as quick as just writing.
Sausage Roll Spy book (pie vs spy 2) - about October to November. The unstarted third spy book (working title Quiches Are Forever) should be mid next year.
Flu - part one about Christmas, the entire 1,000,000 words probably by 2020
The Bailout 2: Tracer - Yeah I started a sequel to The Bailout a few weeks ago. It's set in roughly 2018, which gives the newish dystopian Britain from The Bailout a chance to calm down and get in a routine (as Dystopia's like to). Probably ready next year sometime.
The Debt Collector book - this is the next police procedural featuring the same DI as in Last Gang in Town. Ready back end of next yearish.

Here's a picture of the inside of my shed featuring not only a recently put up shelf, but also a part made 'Trug' made from old pallets (it's in the lower half of the photo). 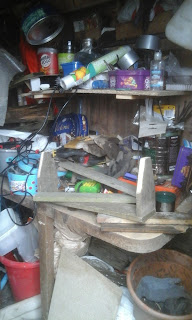 Trugs are actually quite easy to make. I saw plans for one in a gardening magazine and slightly adapted it (ie sawed the wood incorrectly) and have started collecting wood for a few others - thought I might sell them at a car boot sale or give them away for gardening relatives for xmas.

Posted by Charlie Wade at 08:06 No comments:

Charlie Wade is forty years old and lives on the edge of the Peak District in Derbyshire. His latest novel, Seven Daze, was released by Caffeine Nights Publishing on 3rd June.

Some short stories can be found online at the following: